A single journey can change the course of a life 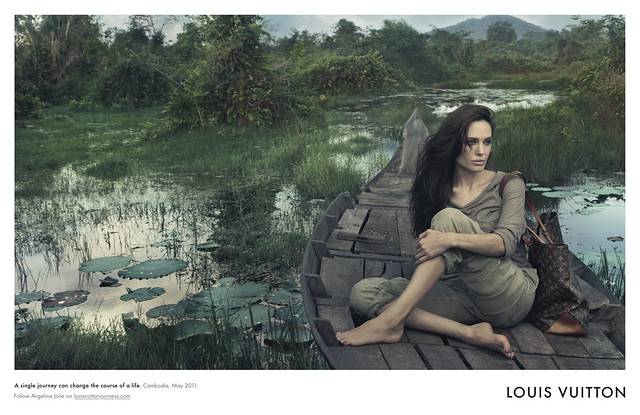 I saw this online last night. Retweeted it right away. This morning after a short text conversation with Louis Vuitton's Vanessa Mayuga, I mentioned UNICEF then she got a thought bubble and sent me this press release that just came out today. What's not to love about Angelina?

And that line, "a single journey can change the course of a life" - is so true. It happened to me.

Angelina Jolie is the latest outstanding personality to be photographed by Annie Leibovitz for Louis Vuitton's Core Values advertising campaign.

The visual – to appear in international titles from mid-June – was shot in Cambodia, a country with which the actress has close emotional ties. She travelled there for the first time in 2000 to film Lara Croft: Tomb Raider, and was overwhelmed by the beauty of its landscapes and the warmth and generosity of its people.

She returned to Cambodia in her role as a United Nations High Commissioner for Refugees Goodwill Ambassador, raising awareness of the dangers of landmines, and subsequently adopted her eldest son Maddox from a Cambodian orphanage. In 2005, she was awarded Cambodian citizenship by King Norodom Sihamoni for her humanitarian and conservation work in the country through the Maddox Jolie-Pitt Foundation, which she established in 2003.

The Core Values campaign pictures Angelina Jolie sitting barefoot in a traditional wooden boat in the luxuriant, watery landscape of Siem Reap province. Next to her is a vintage Louis Vuitton Alto holdall in Monogram canvas, a bag the actress has owned and loved for many years. The tagline reads: "A single journey can change the course of a life. Cambodia, May 2011."

Having described her first encounter with Cambodia as a life-changing experience, Angelina Jolie agreed to be photographed there for Louis Vuitton.

Pietro Beccari, Louis Vuitton Executive Vice President, Marketing and Communications, comments: "We are honoured that Angelina Jolie agreed to participate in our Core Values campaign, whose central theme of travel as both a physical and emotional journey is one with which she can personally identify. Angelina Jolie is a global star in every sense – not only in her career as an actress, but also in her long-term commitment to international humanitarian issues."

Angelina Jolie's fees for this campaign are being donated to charity.