The response to the National Geographic "Live Curious" campaign was phenomenal! A lot of you wrote to me asking: a) how you can get a job working for Nat Geo, b) where you can get these same Tshirts.

I can't answer the first question. But I can say that you and I can all be like Nat Geo explorers by simply living curious lives. Ask a lot of questions, everyday. Everything deserves a why. Encourage your kids to ask questions and look for answers. This is the only way we can make a difference and change the world. Baby steps. And watch the National Geographic channel, they will soon have locally produced TV shows.

As for the second question, well... it's your lucky day(s). The Tshirts are available at Regatta shops. And because National Geographic channel is so awesome they are giving away 15 free tshirts through my blog. The shirts look like these ones we, the ambassadors, wore for the campaign. 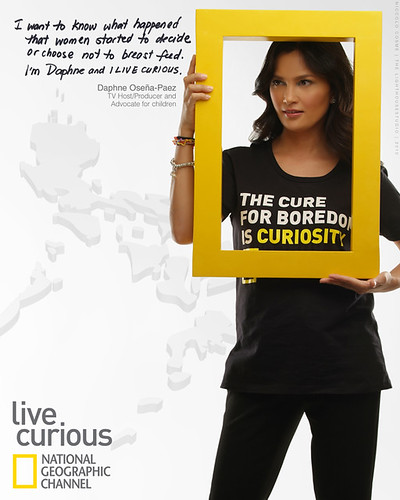 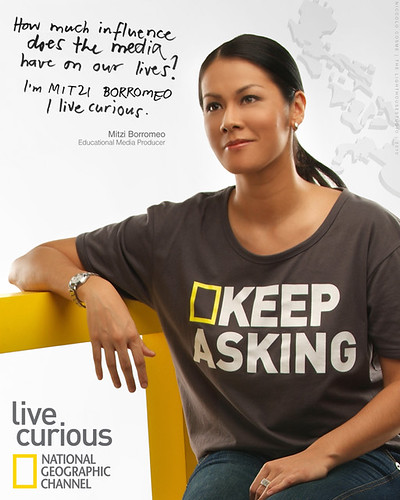 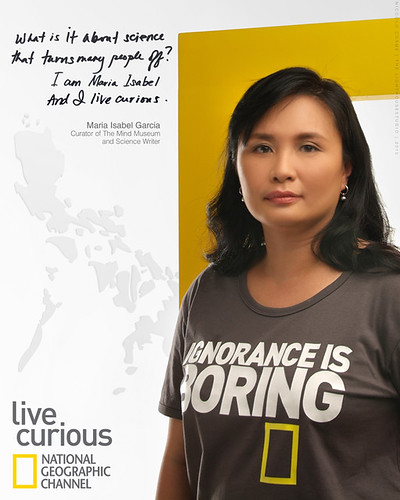 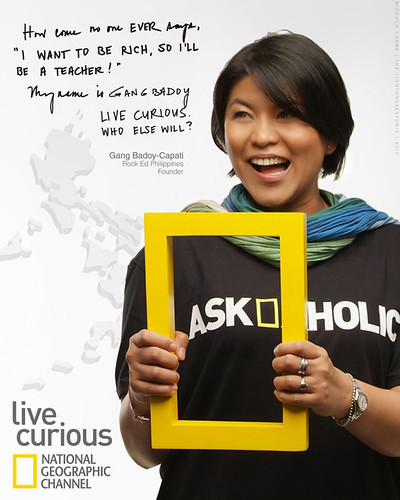 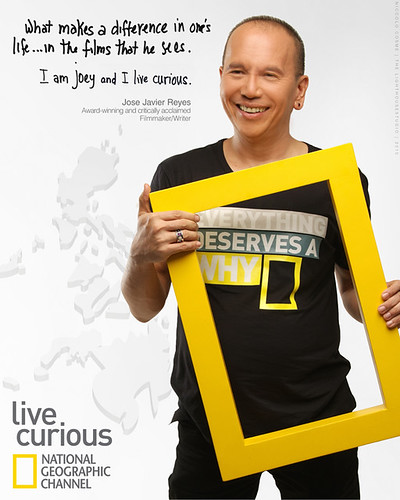 2. In the true spirit of the LIVE CURIOUS campaign, your comment has to be in the form of a question. Just one question. Your question has to reflect what you are curious about. It can range from the most simple to the most complicated. You don't have to answer your question.

3. National Geographic will choose 15 winners, each to receive one free National Geographic Live Curious Tshirt. Winners have to pick up the Tshirts (in person or through a representative) at the NatGeo office in Makati. We will email you the location.

4. Winners will be chosen based on the question that you ask. There's no real criteria - you can be as creative as you want.

5. Winners will be notified by email, so please post your email addresses.

7. Winners will be announced and contacted on Monday October 25.


EDIT: Contest has ended, winners have been announced. 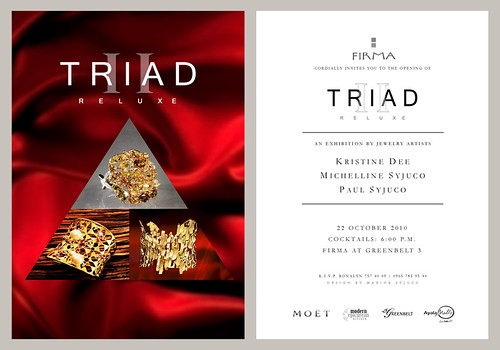 Jewelry artist Kristine Dee unveils her latest collection in the group show “TRIAD II: RELUXE”, touted as probably one of the most exciting jewelry shows of the year. It opens on October 22 at Firma in Greenbelt 3, Makati at 6pm

The idea behind RELUXE (renewable luxury) is recycling precious materials, which gives a second, or even a third or fourth life, to existing jewelry and jewelry scraps. Stones are taken apart, gold and gold scraps are re-melted, re-processed and molded into new forms that excite.


TRIAD II: RELUXE will open October 22, 2010 at Firma, Greenbelt 3. It will run exclusively until October 25, 2010 and be part of Firma stores’ permanent collection. 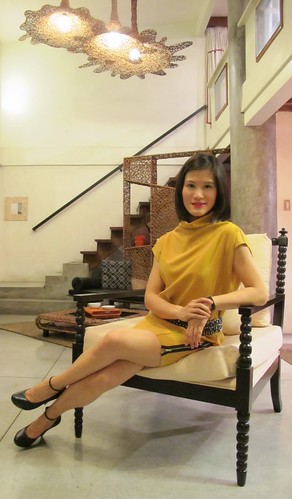 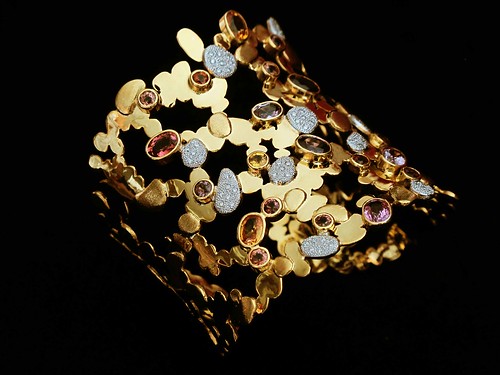 
So many interesting and wonderful things happened yesterday. In a little way I was in the news - lifestyle news and good news.

The biggest thing of course was that Daphne furniture got its first ever feature story. Thank you so much to Thelma San Juan, for her support and stamp of approval. I am overwhelmed by her message! Wow. And thank you to Alex Vergara for the wonderful story. To read the whole article, click here. 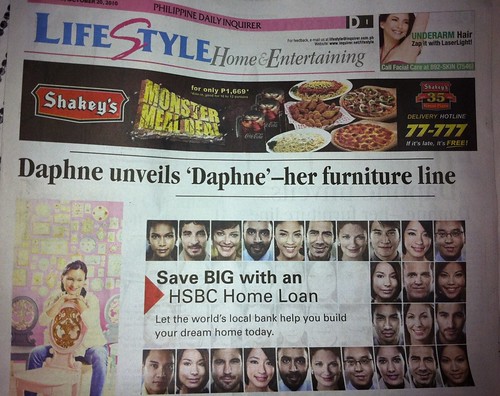 The story was in the front page of Inquirer lifestyle. 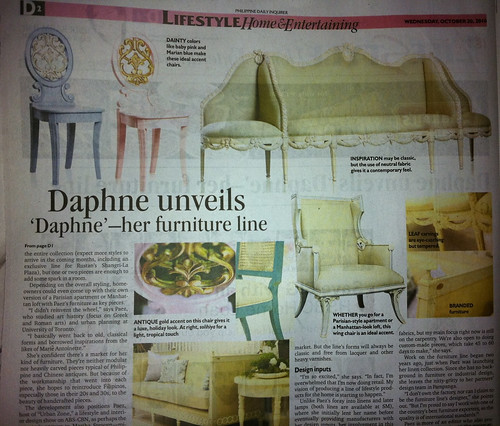 With a lot of photos inside.


In other news... an article came out in ABS-CBN.com from the Olay event last week. I was interviewed by Rachelle Siazon. Thanks so much for the wonderful angle. I really love it. The environment was pretty loud though at the event, so I think Rachelle heard me wrong. I didn't say the word "lucrative." Gasp! We're far from that, haha. I think I was explaining the idea of licensing being a legitimate business. Not sure. But lucrative is not yet in our vocab. Haha. And also ofcourse, my youngest baby is not Bella. Her name is Stella. I do call her Stellybelly or Stellabella sometimes. Thanks Rachelle!!! Love it! 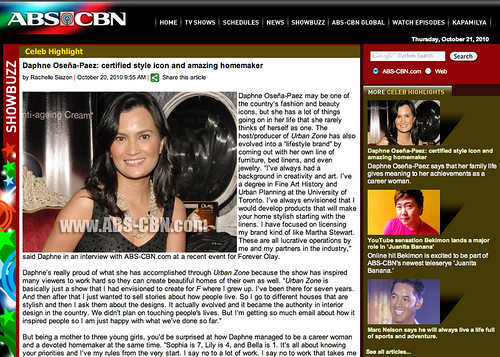 
Now back to the Inquirer yesterday, same issue as Alex's article, Dolly An Carvajal wrote her column on celebrities who tweet. She quoted one of my tweets from the other day: Daphne Oseña Paez (DaphneOP): “Learned a big lesson the hard way. Forgiveness only matters if the other person knows he/she’s been forgiven.” Pretty heavy, I know. Let's just leave it at that. Read the rest of her article here


Still on Twitter, I was quoted again for something more serious. It wasn't just a typical rant. It wasn't even customer service related. It was because of a tweet I sent the Department of Education right after they suspended classes at 10am yesterday. Background: On Monday when the storm was forecasted to hit Northern Luzon, Metro Manila was on Signal #1. Elementary kids were required to go to school. I used my own discretion and declared it unsafe for my 7 year old. So she was absent from classes. Tuesday rolls in after a night of heavy rain, but technically the storm had already exited. Metro Manila was still on Signal #1. Even though I had doubts, I sent her off to school. By 10 am I get a text from her school: classes have been suspended by Department of Education. So that's when I felt I had to say something.

My tweets went like this:
@DepEd_PH Why couldn't you decide on canceling classes before kids get sent off to school? It was raining all night.
@DepEd_PH How hard is it to make a decision before we send our kids out to school? Conditions were bad all night.


It got retweeted by @ANCAlerts and read on air at ANC.

A couple of hours after that, Dep Ed declares a major change in their policies. From then on, in Signal #1 areas, the local government units and school principals can use their own discretion to announce whether classes would be cancelled or not. Wow! That makes more sense because LGUs and school principals would know about the local conditions faster and easier. How's that for change?! 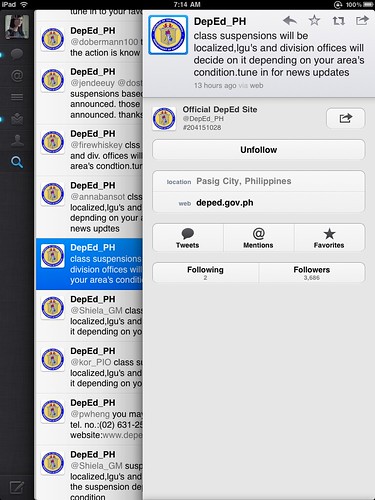 
Yesterday my tweet made headlines in Female Network. I didn't mean to actually "take on" the Dep Ed. I was just asking a question, as a parent. It is extremely stressful for us - we worry about our kids, but we have to go on with our daily work lives. Not all of us can drop what we're doing and rush to school to pick up the kids. It can cause a bit of panic. But I'm grateful to my daughter's school for being on top of the situation and keeping the information flowing really efficiently.

So now schools have the discretion to cancel classes even during Signal #1. Let's all be vigilant. There will be other storms. Listen to the news - my fastest source now is Twitter, not the radio or ANC. So get on Twitter and see you there. 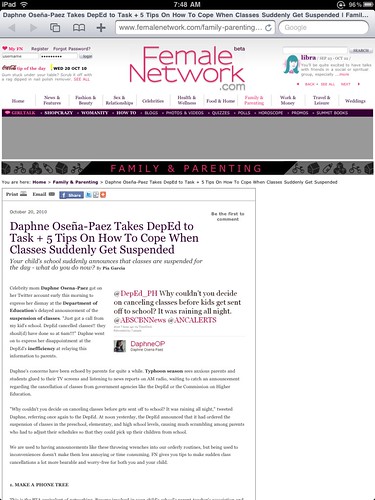